After reviewing the printed NATO and Harris Tweed straps by vario.sg in my previous posts, this time I had the opportunity to look at a watch that is designed by the company. This watch is called the Eclipse watch and is shipped with a quartz movement or a mechanical handwind movement.

My first impression of the Eclipse watch is that it is really a minimalist watch with a simple case design characterized by a thin bezel, thin lugs and a thin crown. The case is polished throughout and has a diameter of 38mm excluding the crown.

The dial design is pretty simple with hour and minute markings presented in the form of black lines. The 3, 6, 9 and 12 o’clock markers are longer, making them more prominent than the rest. It has sunburst texture and the only text you see is its brand “Vario”. The date feature has also been omitted to keep things minimal.

Besides the silver dialed version featured here, this watch is also available in black, grey, green, blue and red dials.

Here’s another picture of the dial. 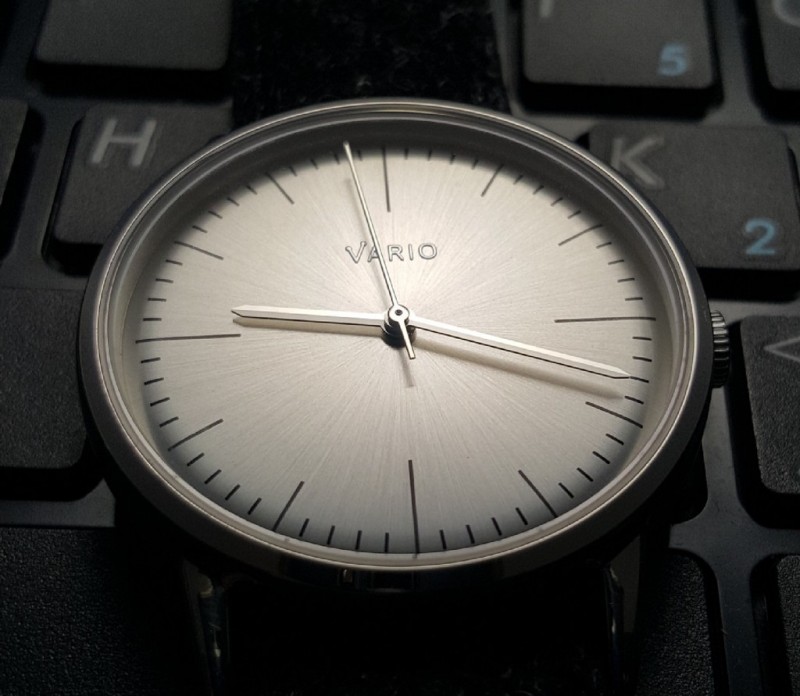 The watch is installed with a double domed Sapphire crystal that is coated with anti-reflective coating for better legibility.

The side profile of the watch is pretty clean and simple. The classic Breguet style lugs is a nice touch.

Below is a picture that shows the shape of the domed crystal. 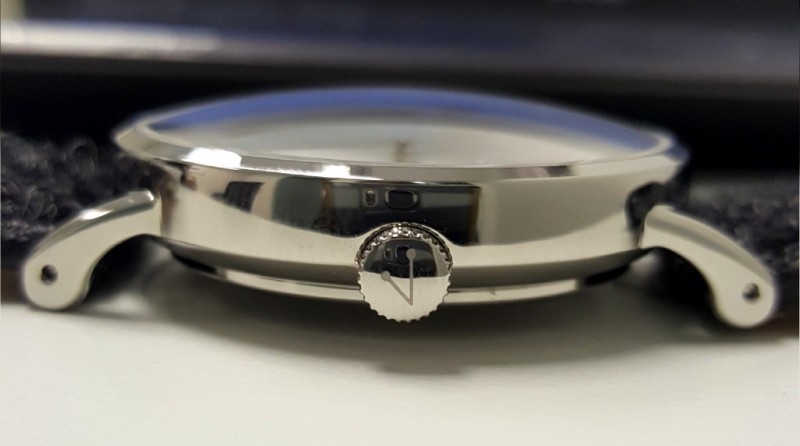 Here’s the story associated to the Eclipse watch as taken from the vario.sg website.

The moon has always borne great significance in many cultures throughout the history, representing immortality, eternity and enlightenment. Chinese mythology speaks of a great hero that shot down nine scorching suns to save the human race, and in return for his deeds received an elixir that would make him a god. He offered to share it with his wife, who took it in secret and ascended to the moon by herself, but a hound, loyal companion to the hero, took what little elixir remained and followed her, swallowing both the wife and moon causing the first lunar Eclipse. The celestial army recognized this as a great feat of loyalty and bravery. The hound was made a celestial being and allowed to guard the heavenly gate.

Below are the casebacks of both the quartz and handwind model. They are identical except for the words “Mechanical” and “Quartz”. Both casebacks feature the design of the legendary hound, accompanied by the Chinese characters “天狗蝕月” (pronounced as “tian gou shi yue” in Chinese) which means “heavenly dog ate the moon”.

The quartz model is powered by the Seiko VH31 quartz movement. This movement ticks at 1/4 second per tick or makes 4 ticks per second, making it look like a mechanical watch with sweep second hand. It has a battery life of two years.

The handwind model is powered by the Miyota 6T33 movement. I seldom come across this movement but after looking it up, I find that it is a 17 jeweled movement that beats at 28,800bph and has a power reserve of 40 hours. With the sample watch that I have here, I find that the handwinding action is pretty smooth and silent. It does not have the second hand hacking feature though.

Both models have 20mm lug and come installed with a Harris Tweed strap by Vario.sg. You can find a link to my review of the strap at the bottom of this post.

Conclusion:
I feel that the Eclipse watch is a simple yet elegant watch designed for people who like minimalist style. This watch does two things – tells time and expresses the wearer’s personality. For those who like to interact more with their watches, the handwind model is a good choice as it requires the wearer to handwind it on a daily basis to keep it going. The quartz model is good for those who prefer minimum interaction.

At USD178 and USD268 for quartz and handwind models respectively, the Eclipse watch offers good value for money as it uses reliable movements made by Seiko and Miyota.

Eclipse Watch featured in this post is provided by: 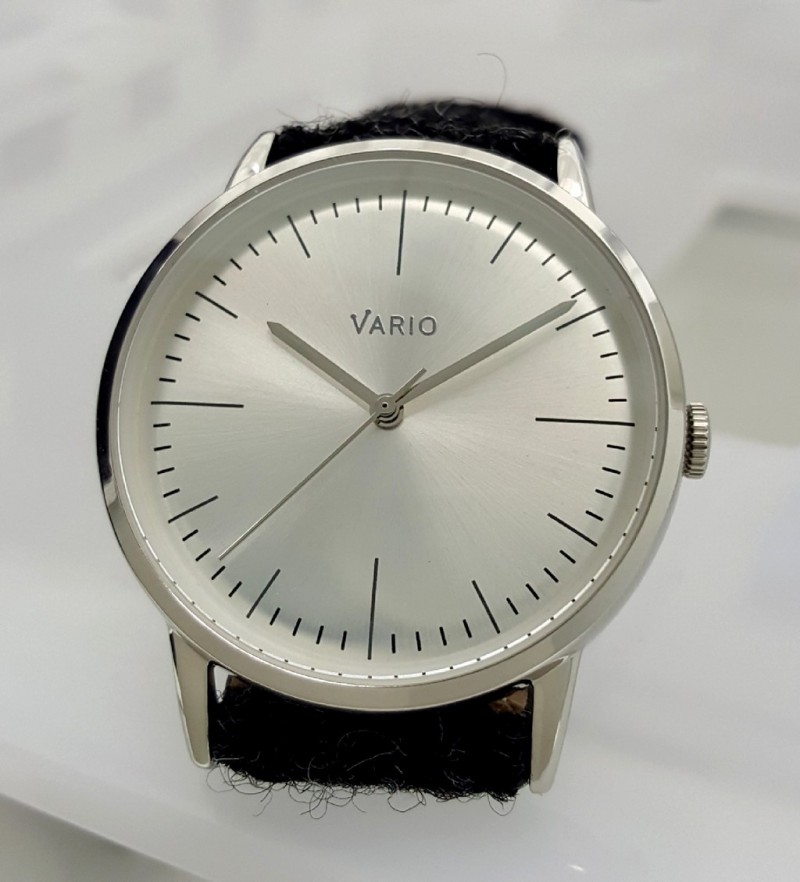 This review is written by Yeoman. 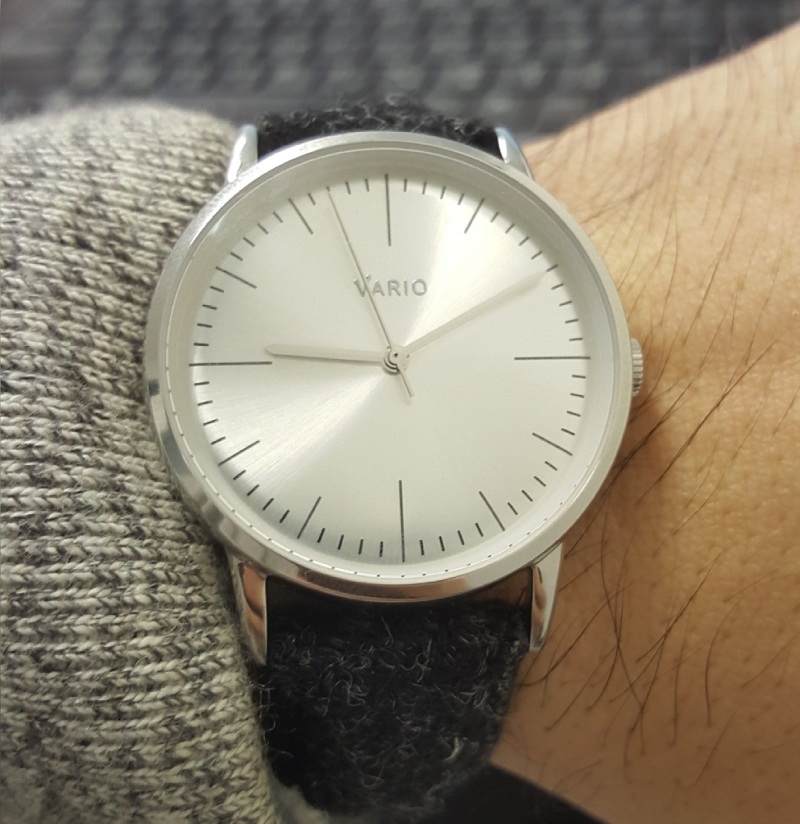 6 thoughts on “Eclipse Watch by Vario.sg”