I saw a black dial Orient 300m diver in the wild today. Saw it when I was queuing up to pay for groceries at the supermarket (NTUC Tanjong Pagar around 7:15pm.). The guy in front of me was wearing the Orient 300m diver on rubber strap.

Earlier today, I was at Big Time and there was a guy who wanted to know the physical differences between the Orient 300m diver and the 200m version (Revolver). I did a post on this topic on my Windows Live Space and it was retrieved to show the customer.

Below is a reproduction of the old post. I have been meaning to archive it here.

The Orient Star 300m diver has been around for quite some time but it was only a couple of weeks ago that I bought mine.

Here’s a post that shows the different colour variants of the diver including the Japan domestic models and the international models. Post dates back to August 2006. 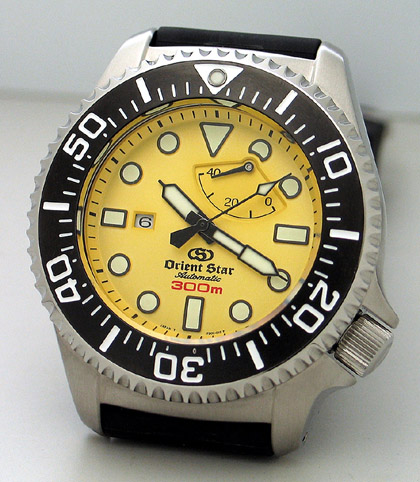 Besides the 300m version, Orient has recently released a 200m version and I managed to borrow a specimen from Big Time for a quick comparison.

At one glance, you will notice some similarities between the two divers. Just to name a few, both have power reserve indicators at the 1 o’clock position and both have very similar case shape. I don’t know if they are using the same or different movement because the information cannot be found on Orient’s website. So I’ll just highlight some cosmetic differences that I observe. 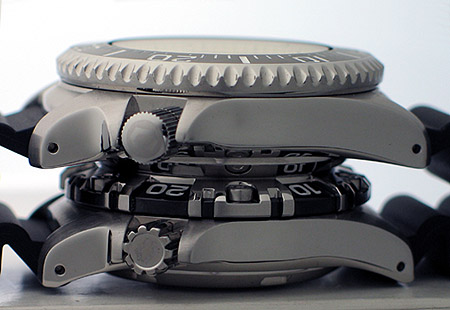 When I first saw the stock photo of the 200m model on the Internet, I thought it uses the same case as the 300m because it is shaped exactly like the 300m except with a different bezel. Now that I them side-by-side, I know they are not. The 300m case is clearly bigger and thicker than the 200m as shown in the picture above.

The 200m seems to have everything smaller on the dial. Here are some examples:

One thing I like about the watch is the black outline on the hour markers. They make the watches more legible. On the 200m, I notice a bit of reflection on the black outlines. This is because they are glossy black compared to the matt black on the 300m that does not have any reflection. Both watches have anti-reflection coating on their crystals.

The crown action is different on both watches. The screw threads on the 300m seem to engage automatically when the crown is pushed in and turned. This is not so on the 200m. User will need to push and turn the crown in anti-clockwise direction and wait for the ‘click’ to indicate that the screw threads have engaged.

Pictures below show the crowns of both watches at the second click position. You can’t see the screw threads on the 300m. 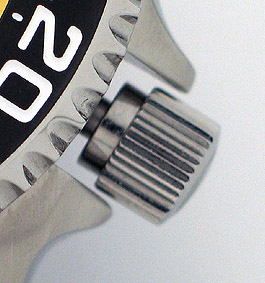 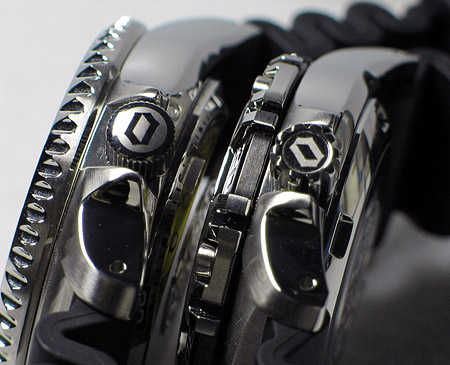 Both watches have the same medallion on their casebacks which is the traditional ‘two-lion’ logo with wave-like stripes on the background. The 300m is inscribed with ‘He-Gas Diver’s 300m’ while the 200m has ‘Air Diver’s 200m’.

The 200m is made from ‘SS + IPC’ as indicated on its caseback. I do not know what ‘IPC’ is but I believe it is the black material on the bezel. 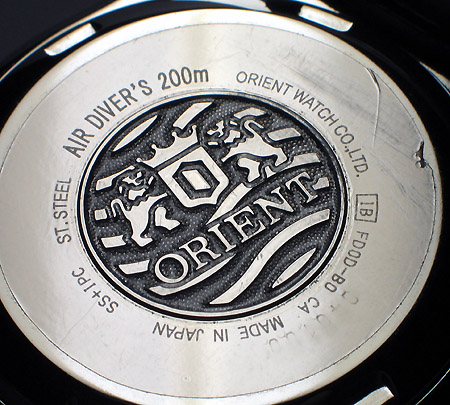