I acquired the Hamilton Khaki Field Automatic H70555533 recently and thought it would be nice to do a quick comparison with the Seiko SARG007 which I already have in my collection. Both of these watches are military inspired and have quite a bit of similarities between them.

The Seiko SARG007 is a discontinued model under the Mechanical line. It is a Japan domestic model priced at JPY45,000 excluding tax (about SGD561.00). This watch is powered by the Seiko 6R15 movement with beat rate of 21,600bph and a power reserve of 50 hours. It has a diameter of 41mm excluding crown. 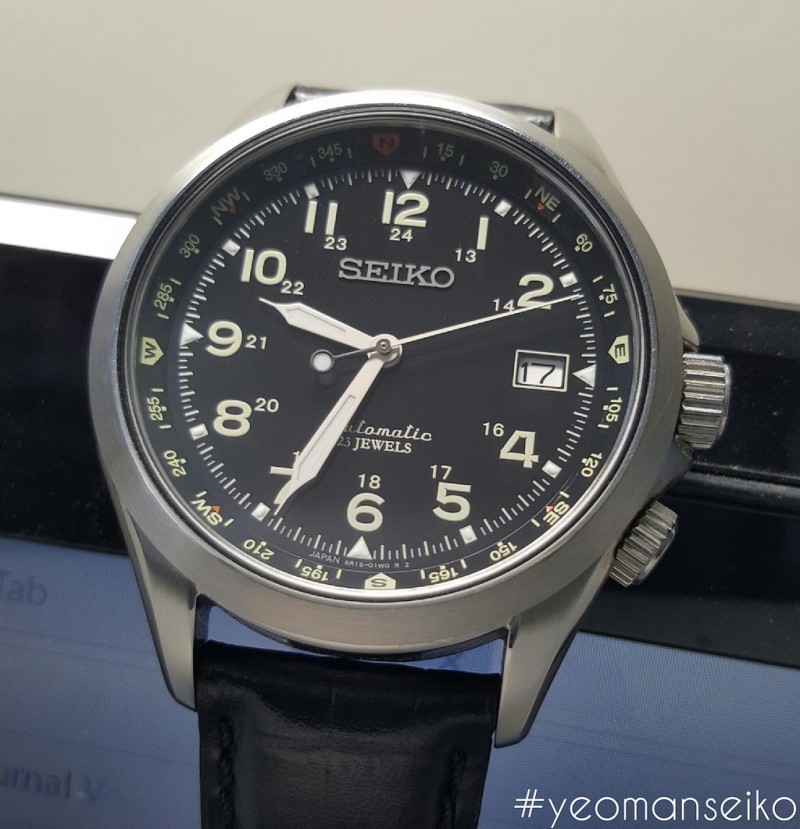 The Hamilton Khaki H70555533 is a current model (as at June 2017) under the Hamilton Khaki Field collection. It is priced at SGD720 inclusive of GST. The price excluding GST (for better comparison with the SARG007) is SGD672.00. This model of Hamilton Khaki Field was previously powered by ETA 2824. This piece I have is the latest version which is fitted with the Hamilton H10 movement. This movement is based on the ETA 2824 but has its beat rate reduced from 28,800bph to 21,600bph and power reserved increased to 80 hours. This watch comes in three sizes – 38mm, 42mm and 44mm excluding crown. Mine is a 42mm.

I always start by looking at the dial when it comes to military inspired watches because this is the part that determines whether I like the watch or not. Both the Seiko and Hamilton have the type of dial layout that I like. They have full hour numerals except for ‘3’ which is ‘eaten’ by the date window. These hour numerals are the right size that I prefer and next to each of them is a 24 hour marking in smaller size. On the Seiko, the ’15’ marking is omitted while on the Hamilton, the ’15’ marking is shifted inwards which is acceptable I guess.

The numerals on the Hamilton are printed in white whereas those of the Seiko are slightly yellowish. 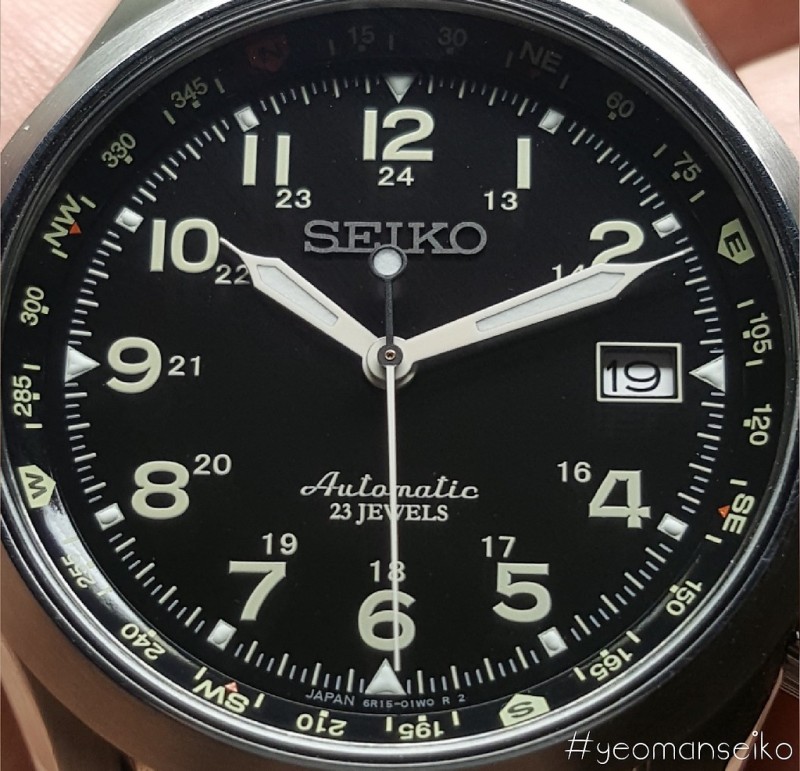 Both watches have similar looking hour and minute hands except the Hamilton has silver coloured outline while the Seiko has white outline. The second hand on the Seiko is mainly white while the Hamilton is again silver. However, it has a red tip and reaches all the way to the edge of the dial.

Both watches do not have anti-reflective coating on their crystals but I see more reflections on the Hamilton than the Seiko. This is due to the curved crystal as well as the dial. The Seiko has a matte black dial and always appear so regardless of which angle you look at it. The Hamilton dial on the other hand appears to be greyish from certain angle. It also has textures on the part where the hour numerals are printed. 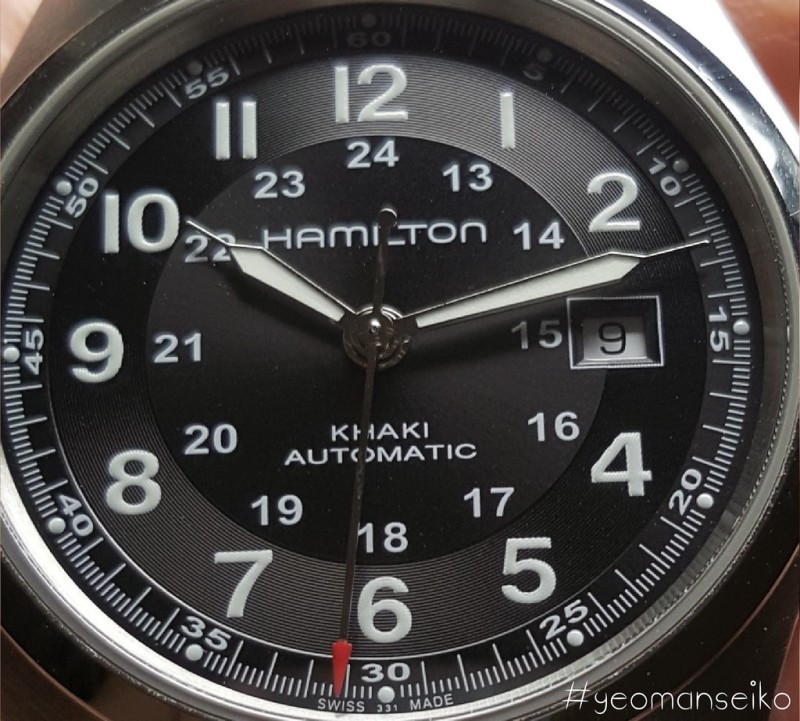 The Seiko is the thicker watch of the two and part of its thickness comes from the taller bezel which is needed to accommodate the inner rotating bezel which can be rotated by the crown at 4 o’clock. 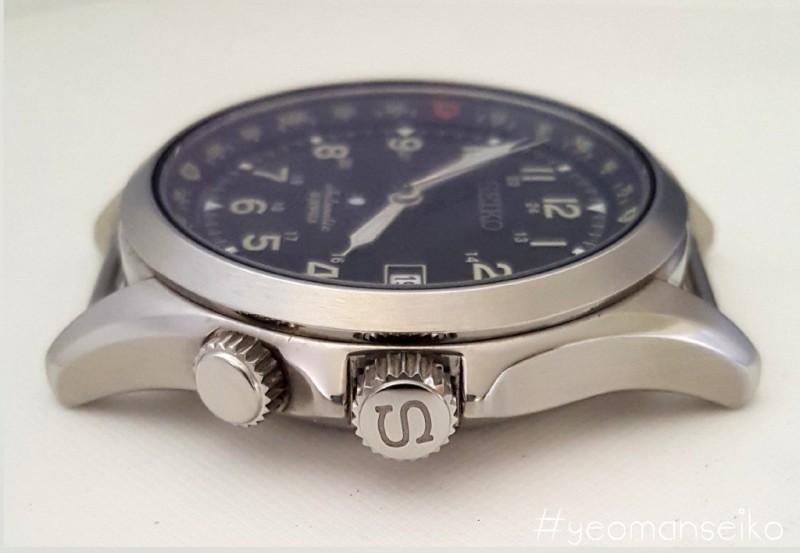 The Hamilton has a relatively flat bezel as you can see in the picture below. 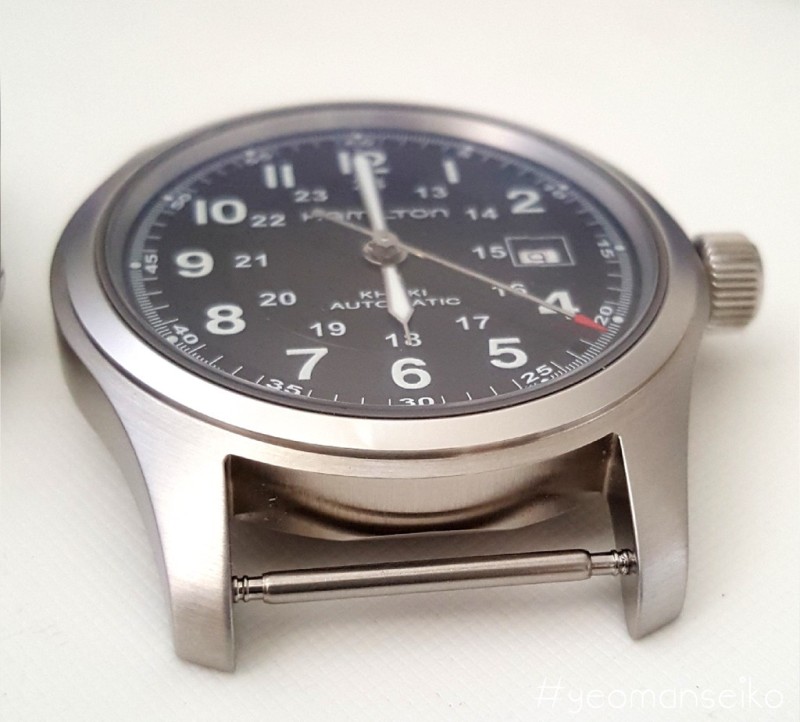 When you turn them around, you will see that the Seiko has polished finishing and the Hamilton has brush finishing. Both watches are water resistant to 100 metres. They do not come with screw down crown. 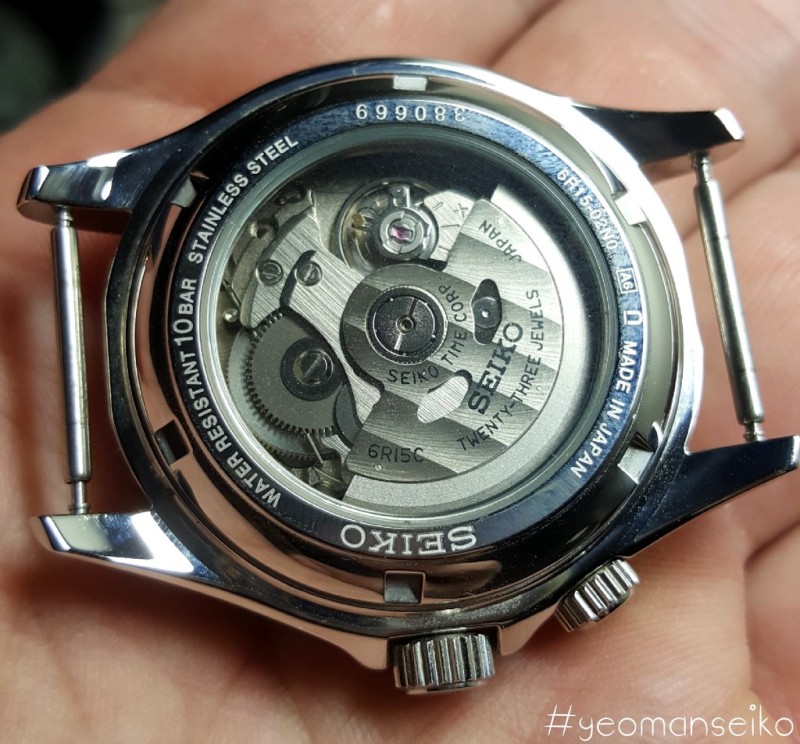 Conclusion:
The Seiko SARG007 and Hamilton Khaki Field share many similarities including the utilitarian look of many military inspired watches. Based on design alone, I would prefer the Hamilton because it has the classic look of a military styled watch and most importantly, it does not have the inner compass bezel and hence the additional crown at 4 o’clock.

The Hamilton though is not the most hardcore military inspired watch out there due to its polished bezel, partially textured dial and silver outline on the hands. Besides being a watch for casual events, it can also be used as a dress watch.

Lastly, if you know of any nice military inspired watches, please feel free to put them in the comments below.

Hamilton Khaki Field H70555533 was purchased at Watches of Switzerland (Vivo City)
Seiko SARG007 is a discontinued model that is no longer available.