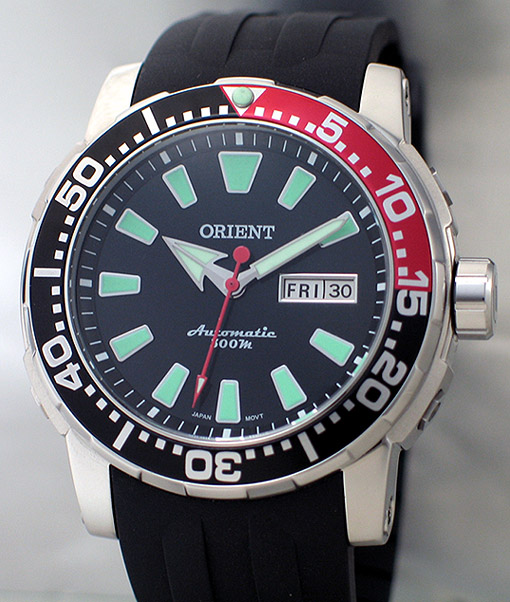 I picked up this Orient 300m diver from a local guy recently and have been wearing it for almost two weeks. This watch is only available in the Brazilian market and is nicknamed “Poseiden” by watch collectors there.

I wore it to two watch shops (Big Time and K2) that I frequent and have received some compliments on it. Here’s a quick review for you.

The first thing I noticed about the watch when I opened up the presentation box was its size. It is a big watch for sure with a diameter of 45mm excluding the crown. The 34mm diameter of the dial/crystal also make the watch look bigger.

Another thing about the watch is that it has a different case design compared to traditional style of the Orient Star 300m and Seiko Marinemaster that I have in my collection.

The dial is very legible because of the large hour markers. The use of green colored lume material contrasted very well with the black dial.

Below is a close up shot of the hands. I believe the hour and minute hands are not exactly the same as those of the Seiko Monster. The Monster hands are flat whereas the Orient’s hands have a folding line that gives them a 3D effect.

Here are the side profile shots. There are two fake bolts on each side of the case and only the one that is marked “He” is the Helium escape valve. The rest are probably for symmetry and the good thing is, they are quite small and are definitely far from being unsightly.

The watch has a slightly curved crystal as you can see in the side profile shots. According to Orient Brazil’s website, it is made of mineral glass.

In case you are not aware. The color on the bezel is red and black rather then the usual red and blue Pepsi combo.

The bezel action feels is a bit odd. It is way too easy to rotate even though I did not get a good grip due to the lack of knurlings on the edge. This is also the first time I encountered a bezel that has ninety clicks per round.

The lume pip glows like a bulb but it is protruding too high up, making it prone to accidental knocks.

The caseback design is quite plain. It has a simple ‘O’ logo at the center instead of the traditional Orient double lion crest. The basic info such as the model number, WR rating can be found on the caseback itself. However, I can’t seen to locate the serial number of the watch. Could it be engraved on the other side of the caseback?

The bracelet/rubber strap is attached to the lugs by two screws with allen head. This makes it quite cumbersome to change strap and you can’t avoid leaving tool marks on the screw heads each time you change the strap.

I still prefer fat spring bars with drilled through lugs. 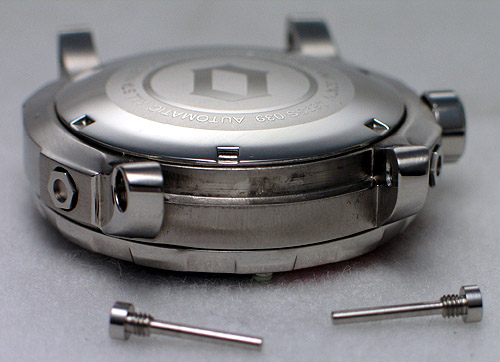 Upon removing the bracelet, you will see that the whole 24mm space between the lugs is left unfinished. Fortunately, it is well hidden by the bracelet and rubber strap.

The watch comes with a nice strap with solid end links. However, it does not have the wet suit extension feature on it.

(Note: this is not the full length of the bracelet. Spare links removed by the previous owner are not shown in the picture)

The rubber strap is soft and very comfortable to wear. I believe it was custom made for the watch as it fits seamlessly into the lugs.

The watch has pretty bright lume compared to other Orient sports watches such as the Mako, Hogrider or Orient Sub. However, the Orient Star 300m diver is still the Orient with the brightest lume.

Here’s a quick cellphone lume shot that does not do justice to the watch.